The ECLIPSE_FILE sub-block of OUTPUT requests that the simulation outputs Eclipse format files. See example below:

The default is to output unformatted unified Eclipse files that are compatible with post-processors such as ResInsight, an open-source post-processor which may be downloaded from the ResInsight website. Five Eclipse files are produced – a grid file (.GRID), an init file (.INIT), a specification file (.SMSPEC), a summary file (.UNSMRY) and a restart file (.UNRST). The restart files are only used as an industry standard output format by PFLOTRAN – they cannot be used to restart an Eclipse run.

The summary files contain a set of standard mnemonics from which line graphs may be obtained, such as FGIP and WGIR. For the full list of available variables and their names refer to Line Graph Mnemonic.

The init and restart files contain grid and solution properties such as permeabilities and fluid saturations.

Below are all the keywords supported within ECLIPSE_FILE:

PERIOD_SUM controls the frequency of the summary file (line graph data) output. This may be done by timestep, or by time period.

This keyword requests output of Eclipse restart and summary data at a series of specified times. For example:

PERIOD_RST controls the frequency of the restart file (pressure and saturations for 3D visualisation) output. This may be done by TIMESTEP, or by TIME period.

MULTIPLE requests ouput of multiple Eclipse restart files (with suffices like X0001) rather than a single unified file with a .UNRST suffix.

Requests output to the eclipse file system of density.

Requests output to the eclipse file system of viscosity.

Requests output to the eclipse file system of relative permeabilities.

Requests output to the eclipse file system of capillary pressures.

The default is to output unformatted unified Eclipse files, although the FORMATTED sub-keyword may be used to request formatted files. Example:

Requests output of tables of fluid in place, well and completion data, and timing data, to the .out file. This will be produced at times at which Eclipse restart files are produced.

May take an optional argument to specify additional output:

Any combination of the characters W, C, or T may be used. Each letter specifies the following:

specifying output of completion and well data to the out file respectively. WC indicates both. FLIP and MATBAL are output in all cases.

The outfile produced will take the following form: 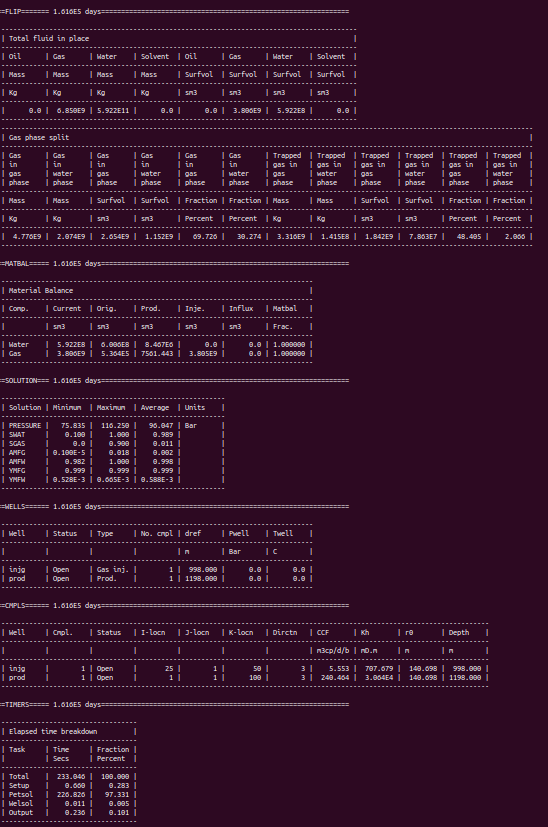 This requests that cell values be written to the .UNSMRY file, so they can be plotted against time later.

An example usage is:

This requests the values of several values, all at cell 10,10,3, be written to the summary file.

The variables available are:

The output from SUMMARY_D/SUMMARY_Z can be found in the Eclipse summary files, and also in the mass file. For example, the following:

adds a summary BPRESSUR summary to block 1 1 100 in the .UNSMRY file, and the following column to the mass file:

By default ECLIPSE_FILE makes PFLOTRAN-OGS write the grid in the .GRID format. By inserting the EGRID card within the ECLIPSE_FILE block, the grid will be output using the .EGRID format rather than .GRID. See example below: